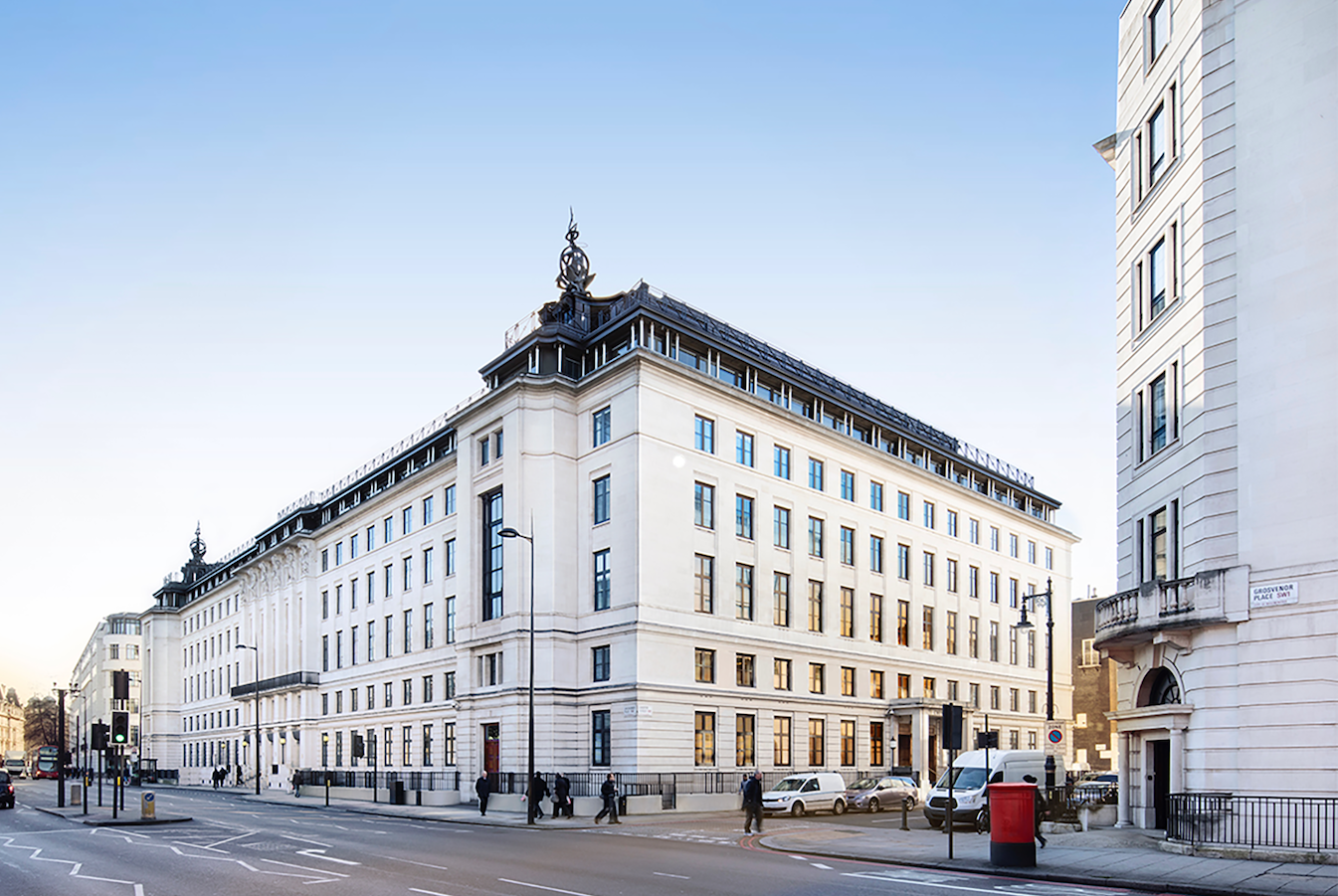 Hemmed In at Home, Nonprofit Hospitals Look for Profits Abroad

Across the street from the Buckingham Palace Garden and an ocean away from its Ohio headquarters, Cleveland Clinic is making a nearly $1 billion bet that Europeans will embrace a hospital run by one of Americaâ€™s marquee health systems.

Cleveland Clinic London, scheduled to open for outpatient visits later this year and for overnight stays in 2022, will primarily offer elective surgeries and other profitable treatments for the heart, brain, joints and digestive system. The London strategy attempts to attract a well-off, privately insured population: American expatriates, Europeans drawn by the clinicâ€™s reputation, and Britons impatient with the waits at their countryâ€™s National Health Service facilities. The hospital wonâ€™t offer less financially rewarding business lines, like emergency services.

â€œThere are very few people out there in the world who would not choose to have Cleveland Clinic as their health care provider,â€ said chief executive Dr. Tomislav Mihaljevic.

Facing the prospect of stagnant or declining revenues at home, around three dozen of Americaâ€™s elite hospitals and health systems are searching with a missionary zeal for patients and insurers able to pay high prices that will preserve their financial successes.

For years, a handful of hospitals have partnered with foreign companies or offered consulting services in places like Dubai, where Western-style health care was rare and money plentiful. Now a few, like the clinic, are taking on a bigger risk â€” and a potentially larger financial reward.

These foreign forays prompt questions about why American nonprofit health systems, which pay little or no taxes in their hometowns, are indulging in such nakedly commercial ventures overseas. The majority of U.S. hospitals are exempt from taxes because they provide charity care and other benefits to their communities. Nonprofit hospitals routinely tout these contributions, though studies have found they often amount to less than the tax breaks.

Despite their tax designation, nonprofit hospitals are as aggressive as commercial hospitals in seeking to dominate their health care markets and extract prices as high as possible from private insurers. Though they do not pay dividends, some nonprofits amass large surpluses most years even as more and more patients are covered by Medicare and Medicaid, the U.S. governmentâ€™s insurance programs for the elderly, disabled and poor, which pay less than commercial insurance. Cleveland Clinic, one of the wealthiest, ran an 11% margin in the first three months of this year and paid Mihaljevic $3.3 million in 2019, the most recent salary disclosed.

The advantages of international expansion for their local communities are tenuous. Venturing overseas does not provide Americans with the direct or trickle-down benefits that investing locally does, such as construction work and health care jobs. Even when hospitals abroad add to the bottom line, the profits funneled home are minimal, according to the few financial documents and tax returns that disclose details of the operations.

â€œItâ€™s a distraction from the local mission at a minimum,â€ said Paul Levy, a former chief executive at Bostonâ€™s Beth Israel Deaconess Medical Centerand now a consultant. â€œPeople get into them at the beginning, thinking this is easy money. The investment bankers get involved because they get the financing, and the senior faculty get on board and say, â€˜This is great; it means I can go to Italy for two yearsâ€™ â€” and thereâ€™s not a real business plan.â€

There are financial hazards. For instance, Cleveland Clinic has warned bondholders that its performance could suffer if its London project does not launch as planned. There are also risks to a systemâ€™s reputation if a foreign venture goes awry.

Finance experts temper expectations that operations of overseas hospitals will have a major bearing on a systemâ€™s balance sheet. â€œEven though they do well, theyâ€™re small hospitals â€” theyâ€™re never part of the overall picture,â€ said Olga Beck, a senior director at Fitch Ratings. â€œIt does help [the U.S. operations] because it gives a global name and presence in other markets.â€

Hospital executives say their foreign ventures provide an additional source of revenue, thus adding stability, and benefit the care of their hometown patients.

â€œAs we go to different areas around the world, we learn and we continuously improve for all our patients,â€ said Dr. Brian Donley, CEO of Cleveland Clinic London. He said the clinic has learned from U.K. practices more efficient ways to sterilize surgical instruments and perform X-rays.

For decades, wealthy foreigners â€” who are willing to pay the list prices for specialized surgeries and cancer care that domestic insurers bargain down â€” have been appealing targets for U.S. hospitals. Hospitals like MedStar Healthâ€™s Georgetown University Hospital in Washington, D.C., solicit and assist foreign patients with special offices staffed by people with job titles such as â€œinternational services coordinatorâ€ and â€œinternational services finance administrator.â€

Between July 2019 and June 2020, U.S. hospitals treated more than 53,000 foreign patients, charging them more than $2.8 billion, according to a survey of members by the Chicago-based U.S. Cooperative for International Patient Programs. In addition, instead of just importing patients, 37 of 51 health systems in the survey said they offer international advisory or consulting services abroad.

â€œâ€˜Send us your patientsâ€™ is pretty much a dying approach,â€ said Steven Thompson, a consultant who has spearheaded international programs for Baltimoreâ€™s Johns Hopkins Medicine and Bostonâ€™s Brigham and Womenâ€™s Hospital. â€œPeople see it on both sides for what it is: a one-way relationship.â€

One of the oldest foreign ventures is the organ transplant program the Pittsburgh-based nonprofit system UPMC has run in Palermo, Italy, since 1997, when Sicilyâ€™s government and Italian insurers realized it would be cheaper to perform those procedures there than continue to send patients to the U.S. Since then, UPMCâ€™s Palermo facility has performed more than 2,300 transplants.

In this initial expansion, the U.S. hospital was providing a highly specialized type of surgery â€” one that UPMC is renowned for â€” that was not available locally. But UPMC, one of the most entrepreneurial U.S. health systems, didnâ€™t stop there. In Ireland, UPMC owns a cancer center and provides care for concussions through sports medicine clinics. Since 2018, the system has acquired hospitals in Waterford, Clane and Kilkenny. They are staffed mostly by independent Irish physicians, but UPMC regularly sends over its leading U.S. specialists to lend expertise, according to Wendy Zellner, a UPMC spokesperson.

UPMC has company in Ireland: in 2019, Bon Secours Mercy Health, a Roman Catholic system with hospitals in Eastern states, merged with a five-hospital Catholic system there.

Over the past two decades, UPMC did advisory and consulting work in 15 countries but ultimately decided to narrow its involvement to four: Italy, Ireland, China and Kazakhstan, where UPMC is helping a university develop a medical teaching hospital. Charles Bogosta, president of UPMC International, said UPMC wanted to focus its efforts where it was confident it could improve the quality of care, bolster UPMCâ€™s reputation and earn profit margins greater than its U.S. hospitals do.

UPMC officials said the economics are favorable abroad because labor is cheaper and the mix of patients is heavily tilted toward those with commercial insurance, which pays better than government programs.

â€œWhat weâ€™ve been doing overseas has been really helpful in addressing what everyone in the U.S. is trying to do, which is come up with diversified revenue sources,â€ Bogosta said.

Even so, that extra revenue remains a small part of UPMCâ€™s earnings. The health systemâ€™s foreign hospital business generated gross revenues of $96 million, or 1% of UPMCâ€™s $9.3 billion total hospital revenues in 2019, according to a KHN analysis of a UPMC financial disclosure. Since that figure is before accounting for the costs of running the hospitals, taxes and other expenses, the actual profits the foreign hospitals might send back to Pittsburgh are much smaller. In Ireland, where corporations are required to disclose audited financial statements, UPMC Investments Ltd., an umbrella group that owns the Waterford hospital operation and property, reported net profits of about a half-million dollars in 2019 on more than $47 million in gross revenues.

In an email, Zellner said the Ireland statements â€œdo not give you the totality of the picture in Ireland or International, where our results are far better than these documents would suggest.â€ UPMC declined to provide more detailed financial data.

Like other systems, UPMC has expanding ambitions in China. In 2019 it signed an agreement with the multinational corporation Wanda Group to help manage several â€œworld-classâ€ hospitals, starting with one opening in Chengdu next year.

Anadolu Medical Center, which Hopkins helped establish in Istanbul in 2005, was â€œplagued by quality problems,â€ including overbooked operating rooms and physicians who refused to follow evidence-based procedures and quality protocols, he wrote. Thompson attributed the problem to the Turkish mandate that the hospital be run by a Turkish citizen and wrote that the problems did not dissipate until Hopkins was allowed to install its own manager in the second-highest position and dissolve the top position to get around the citizenship requirement â€œwhile remaining in technical compliance with the law.â€

While â€œthe project is now thriving,â€ he warned that â€œlending the Hopkins name to a hospital that delivers unimpressive care could significantly damage our 135-year-old brand â€” and thatâ€™s a real danger in developing areas, especially in a projectâ€™s early days.â€

Hopkins has remained skittish about outright ownership or even management responsibilities. Instead, it has affiliations with hospitals and health systems in 13 countries, including Vietnam, China, Turkey, Lebanon, Brazil and Saudi Arabia. Hopkins does not run any of the hospitals but helps develop hospital master plans and clinical programs, trains doctors, and advises on patient safety and infection control.

Even so, in 2014 it created a joint venture with the oil and gas company Saudi Aramco to provide health care to 255,000 employees and their dependents and retirees. Hopkins, which owns a fifth of the venture, said all foreign net revenue is returned to the systemâ€™s parent organizations to fund research, expansion of care and scholarships. But its public records report meager income from its foreign subsidiary, just $7 million in 2018 â€” a tenth of a percent of the health systemâ€™s $7 billion revenues.

Charles Wiener, the current president of Johns Hopkins Medicine International, focused on other benefits. â€œIf we can put in robust quality and safety at one of our affiliates, their patients do better,â€ he said. â€œIf we can export our education and training models, we believe that allows our people to benefit from learning from other cultures, and some of their people come here to train.â€

Cleveland Clinic London is unusual in that U.S. health systems rarely build a hospital abroad from scratch without a local partner. The clinic chose that more cautious approach with Cleveland Clinic Abu Dhabi, a 364-bed hospital owned by the Mubadala Investment Co. that the clinic manages. It also has a consulting practice that is helping a Singapore health care company build a hospital in Shanghai.

Foreign enterprises appeal to the clinic because it has limited growth opportunities in Ohio, where the population is growing slowly and aging, meaning more patients are leaving high-paying commercial insurers for lower-paying Medicare. The clinic has expanded in Florida, acquiring five hospitals to take advantage of population increases and wealthier patients there.

The London project will have 184 beds and eight operating rooms. Donley said it will be staffed primarily by U.K. physicians, including ones who also work for the National Health Service.

â€œThe clinic has a long track record of being able to execute on its strategies,â€ said Lisa Martin, an analyst at the bond rating agency Moodyâ€™s Investors Service. â€œThe London project is obviously the biggest venture and the biggest financial risk that theyâ€™ve made abroad.â€